Follow Catch My Drift? on WordPress.com
Join 402 other subscribers 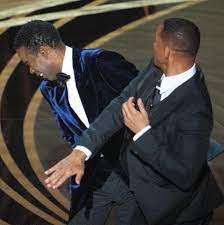 The Oscars Slap. The Slap that was heard around the world. The outrage over this one violent act, even amidst conflict in locations throughout the globe, came as more of a shock to me than the slap itself. By the time this page is posted there will have been lots of sincere discussion and whataboutery on social media, in print and in coffee shop gatherings. Conversation is a good thing. This incident produced an excellent exchange with my eldest son.

Together we identified the issues that this act of violence highlighted: female agency, male power, comedic intent, manners, and personal illness were among the many relevant points. For me the central issue was society’s tolerance of violence. I told my son that I could not condone any form of violent action against another. I see many challenges in life in a spectral way. With respect to violence I might place a hurtful comment on one side of a continuum and an act of war on the other extreme. The point I was making with my son was that I believed that emotion drives the violence and regardless of the degree, we are responsible as individuals to control our responses to anger, hate, or other feelings that would fuel hurting others. “You’re more of a pacifist than I am.” said my son. I’ll take the label.

The Covid-19 reality has made death a counting game. I fear that it has produced a tolerance among us to loss. Likewise with the war in Ukraine, in the early days we have argued against helping for fear the conflict will escalate. Meanwhile people are hurt from disease and the feeling that they are struggling alone. Essentially we are alone, yet we help our neighbour. We are individuals, yet under normal circumstances we resist using violence to solve our problems. When collectively we act emotionally we can advance civilization. The opposite can also be true; when we are pushed we want to push back.

Looking back through my life I recalled two people who have faced my violent response: One was a bully at school when I was twelve, the other was a student who was swinging a ruler at me in my early days as a teacher. He had cornered another student and I stepped in to protect, slapping the aggressor in the process. I’ll put the former down to youthful indulgence but the latter I felt instant regret. I apologized and wished I could have thought of a better way to defuse the situation. Most schools now have a zero tolerance policy to violence and bullies are called out, even when the behaviour is passive/aggressive.

I find it surprising that we tolerate violence in some sports and not in others. I look at the Will Smith/Chris Rock altercation and wonder why that awards show went on at all. I thought of movie westerns where one punch leads to a wrecked saloon. Simply put, maybe saner heads prevailed on Oscar night. Everyone assembled took a breath and carried on. More violence would have been wrong.

I've had a career as an elementary school teacher. During that time I wrote for newspapers and magazines. Writing is a part of my daily life: It's a way to stretch my thoughts, reach out to the world, offer an opinion and record my passage. I take joy in words as other artists express themselves through dance, acting, sculpture or paint. A single word can evoke powerful visions. I see life as a celebration. Like all humans I am complex and curious even while some have called me conventional. I follow my father's belief that everything can be awesome, if you choose it to be. I'm a work in progress, just like this blog, now with 250 postings of thought and ideas. Social media, like pen palling or ham radio connections of yore, can be a positive way to build that great, vast realm that is human consciousness. Leave me a comment if you are so moved or reach me on Instagram, Mastadon or in the Twitter world @wh0n0z. View all posts by catchmydrift.blog