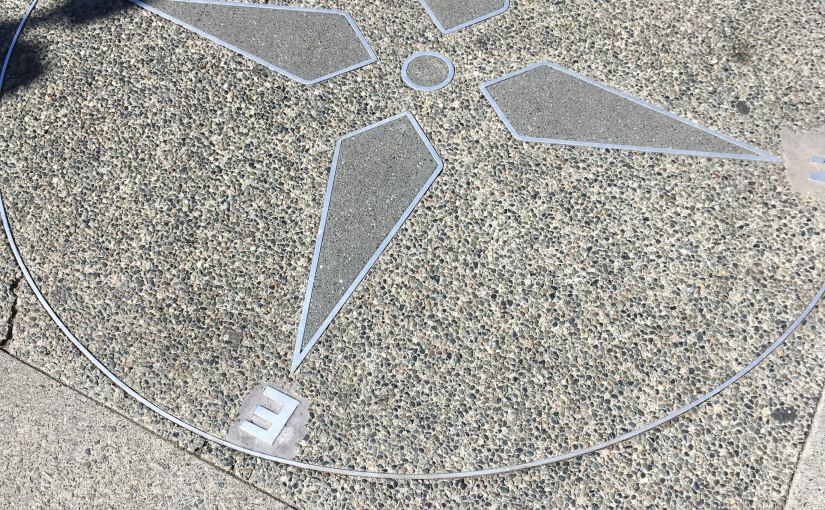 There is a compass rose on the sidewalk at the busiest corner of our downtown. I found it helpful when I first moved here to orient myself on the street grid. It provided a sense of place for the wayward way I was feeling while I settled into my new home. A compass rose is normally a feature on a map and as a kid I loved planning imaginary adventures while tracing the outlines on maps. I got hold of maps of ancient mariners like Vasco da Gama or Francis Drake so I could follow their routes around the world. Most youngsters enjoyed comics yet I also found pleasure leafing through an atlas, which gave me an all encompassing view of what might be possible, at least in my imagination.

The compass is one of the four great inventions that came from the dynasties of China. The device was modified through the ages from a simple lodestone beginning. Navigation over great distances became possible. It helped fulfill our innate urge to go somewhere; to boldly go where no one had been before. I was given my first compass in Boy Scouts. I learned how to use it on rambles through the woods and while canoe tripping. Having one in my pocket gave me confidence that I would not lose my way. Later I would teach the use of the compass during a fun outdoor activity called orienteering. Using a topographical map and compass bearings, students in teams could find the quickest or most efficient way to a fixed point. Somewhat like this sport is a newer craze called geocaching; this international activity uses a GPS device to discover treasure drops left by others, uniting geography with community.

I love the way the word Compass is part of the word Compassion. This was surely by the coincidence of matching letters, yet compellingly accurate since the act of compassion can show us the way to meet others in life. Being compassionate is akin to being kind and is promoted by all religions and creeds. I was once given a translation of the Bible called ‘The Way’.

Merely holding a compass in your palm can be philosophically profound. As the needle naturally settles to magnetic north, you become aware of the 360 degrees which encompasses your position. This suggests a moment of unlimited potential as you choose which direction to face, then take your first step. You are the centre of the world, have a unique vantage point and fundamental choice regarding which way to go. The cliché of ‘the way forward’ becomes a shallow expression since your options, by degrees, are in the hundreds. You can go back from where you started, veer to the northeast, or, in Peter Pan speak, “Second star to the right and straight on ’til morning. ”

Technology continues apace with digital devices like the commonly used GPS, which has become invaluable for modern day adventurers.  It does position you globally in a very precise way, however, perhaps paradoxically, it only shows you where you are, it doesn’t tell you where to go. That is up to you.

I am a lifelong writer and teacher. My work has appeared in newspapers and magazines. Writing is necessary to me: It's a way to stretch my thoughts, reach out to the world, offer an opinion and record my passage. I take joy in words as other artists express themselves through dance, acting, sculpture or paint. A single word can evoke powerful visions. I see life as a celebration. Like all humans I am complex and curious even while some have called me conventional. I follow my father's belief that everything can be awesome, if you choose it to be. I'm a work in progress, just like this blog, now with over 200 pages of thought and ideas. Social media, like pen palling or ham radio connections of yore, can be a positive way to build that great, vast realm that is human consciousness. Leave me a comment if you are so moved or reach me in the Twitter world @wh0n0z. View all posts by catchmydrift.blog