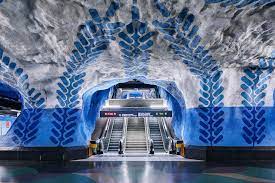 As the train approached the station I felt the familiar rush of wind being pushed by the plunger of the lead car through the tubular underground channel. My hair blew back, I stepped further back from the platform, the brakes squealed and the announcer advised, “Please step back from the doors.” I was excited to be riding the subway of my childhood for the first time in fifty some odd years. The TTC (The Toronto Transit Commission) was once disparagingly referred to as Take The Car. In my opinion it stands up to other cities, at least in terms of efficient subways. It’s a modern mass transportation system that works.

My earliest memory of the Toronto subway was taking the bus from my childhood home in Scarborough to the nearest subway stop then navigating my way to dance lessons, stamp stores or to the C.N.E. My parents would take my sister and me downtown on special occasions like birthdays or when we won a trophy for something. It was extra special when I could get to sit in the very first car so I could get a visual sense of our forward momentum. It was scary and thrilling at the same time as the car pierced the darkness and then came the proverbial light at the end of the tunnel as we pulled into the tiled terminal. Some subways I have been in have more than tile at their station stops. In Stockholm for example, their Metro is worth riding even if you have no destination in mind. Each cavernous terminal point is beautifully lit with fascinating art and historical references to the city and Sweden’s culture. This experience might be called the Caves of Lascaux 2.0 for its modern nod to the famed prehistoric ochre paintings.

I don’t work in Toronto, nor do I use the city transit system on a regular basis so my opinion is based on fondness for the transport mode, happy childhood memories and fun touristy sorts of thought. This is not very scientific, hardly objective, yet riding the rails is fun. And for me it’s a sentimental trip. My first free range solo adventures hinged on my confidence in taking public transit. When I went to the Canadian National Exhibition my wallet contained change totalling no more than five dollars and a return TTC paper ticket. My first time alone there was when I was nine. My mom checked my wallet and combed back my hair with her palm. My dad asked if I had my handkerchief and quizzed me on bus stops. They both said to have fun, watch out for pickpockets and be home by eight.

I counselled myself the same way as my parents did, for my most recent trip. I researched the route by computer but eschewed taking a cell phone. I felt alert with self responsibility, didn’t get lost, consulted with a bus driver, was amused when a traveller bared his bum and some riders gasped. I didn’t scale Mt.Everest but my trips have created stories to tell.