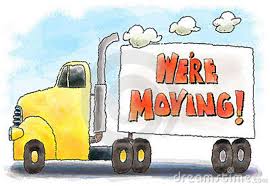 A fellow my age moved into our complex last weekend. He had a small rental moving van, his daughter and another young fellow were helping. I introduced myself and welcomed him to the neighbourhood. He puffed, “ I’m getting too old for this moving business. Next time I’ll pay someone.” Like me, he had concluded that he was coming to the end of his moving on, moving in, moving out options. I figure my next move will be my last. I’m no longer as young as Billy Joel when he recorded this ode to movement; then again neither is he.

Many of us can describe multiple moves within our lifetime; some comical, some hair-raising, some ill advised, some work related, some to upgraded digs and others for practical reasons only. We move because we can and we move when we have no choice. In our youth we can relish the feeling of being on the move; people to see, places to go. Couch surfing is a great descriptor of an adolescent’s freedom of movement. A backpack and a place to lay your head are all the requirements needed for adventure. When we get older our joints are less moveable, we’ve accumulated things and we’re settled into our routines. The movement that becomes most important is that of our bowels, preferably on a regular basis.

I’m emotionally moved more frequently these days. A song might move me to tears. A conversation might move me to action. I can be moved by a single line in a film. I find moving pictures, or movies, to be aptly named. Who doesn’t laugh at the movements of Charlie Chaplin, the physical humour of Dick Van Dyke or Melissa McCarthy. I found Earnest Hemingway’s A Moveable Feast yawn inducing yet his poignantly perfect The Old Man and the Sea continues to feed my emotions and my thoughts.

“Move it!” would be something my mom would shout when she was exasperated with my sister and me as we lollygagged before a trip. Getting in the car usually meant a long uncomfortable drive in hot muggy weather to visit someone we didn’t like. We had several household moves during my childhood, always to find a dwelling my folks could afford to rent. My favourite move was to a falling apart farmhouse which had a chicken coop where my job was to collect the eggs every morning. Later we moved up, status-wise, to actually owning a small semidetached house in suburbia, which unfortunately took me away from all my high school friends. I’ve only cried harder twice more in my life. In my case it’s probably not coincidental that emotion contains the word motion, i.e. movement.

My latest move came after retirement, to a land of milder climate. I’m no longer moved by the sight of gently falling snow, nor angered by the need to shovel the driveway. I’ve removed all reference to winter. This home finds me moved by the plaintive call of the gull and the beauty of the seashore.

These blog postings are a way to stretch my thoughts, heal my wounds, offer an opinion and record my passage. I take joy in words and the powerful visions they evoke. I'll be faithful in sending out a piece every Monday. I see life as a celebration. Like all humans I am complex. I am naturally an 'Awelogist' (this is a philosophy of my own creation, itself a work in progress). Let me know what you think by clicking on the site button. For other daily writing burps (or farts), visit my tweets @wh0n0z and join in the growing new wordpuzzle craze called #levidrome. View all posts by catchmydrift.blog